This 9-track LP was “lost” & fortunately reclaimed by Nova Scotia-native Mike Younger 20-years later. I always question what the word “lost” means. If you add up all the “lost” LPs I get the impression record companies are disorganized. Maybe a better word would be “shelved.”

That’s what most record firms do when they run into trouble with an LP. Out of $$, marketing can’t promote it, lost interest, management/ownership changes. But “lost” – as in where did it go? Everything is supposed to be cataloged. There’s an investment here.

However, today’s pop music is different. But, in a rock context, this is still ahead. It’s better than many vapid “so-called” rock LPs of today. This has music shaken not stirred. Soul with some tight grooves reminiscent of the glorious Delaney & Bonnie era. Especially “Soulsearching.” A blistering white-soul shake with musical calories. Tighten your belt.

Younger proves his mettle with “Laying Low.” A sincere ballad weaved with rich soulful backup support. Recorded in Jan. 2001 these 9 cuts would’ve been his fifth LP before the label shut its doors. Even with the contributions of the late Levon Helm (The Band – drums) & Jim Dickinson (piano).

When word reached Younger of Memphis’ Sounds Unreel closing he feared the analog tapes would indeed be destroyed, auctioned off, or “lost” forever in a dumpster. But a former employee secured the tapes. She knew where they were.

Younger didn’t have the masters stolen, reps haggled to secure the tapes, a financial arrangement was made & no issues. 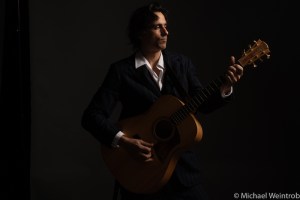 The songs skim the tradition of The Band (not its rural style, it’s soulful one), Delaney & Bonnie (“Comin’ Home”) with a Stax studios feel. The songs — impeccably recorded retain charm & resonate with solid rhythm, clarity & sanded to a smooth toned finish. There are times Mike’s vocals are borderline blues. Classic with black-intonation that percolates. “Devil’ On the Rise,” exudes this. The horns are mindful of grains of The Barkays (“Soul Finger”), & Arthur Conley (“Sweet Soul Music”) with a lead guitar that is in a persuasive Steve Cropper tradition.

The only blemish? The front CD art. The music deserves better representation. This mess challenges one’s reading ability. Any of Mike’s portrait images would’ve been better.